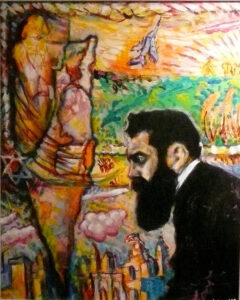 HOME(less) features the works of seventy international artists who explore the meaning of home and the loss of home in works reflecting personal experience, historical and contemporary events, cultural diversity, and the universal human condition.

Curator Laura Kruger describes the scope of this exhibition by asking, “Home – is it an actuality, a concept, a dream, or some combination of these and more? Is it primarily a shelter, a refuge, a storage place, a hope, an aspiration, ideal? We identify ourselves by the idea of a homeland although we may not have visited or dwelt in such a place. We are made homeless by arbitrary acts of nature – fire, flood, the heaving of the earth – and by war, illness, and poverty. Today, humankind is living in an ever-increasing morass of homeless people, refugees, and displaced individuals.”

Home as a place of welcome ranges from Richard McBee’s depiction of biblical hospitality in his “Abraham, Sarah, and the Three Strangers” (2000), to Nathan Hilu’s “How the Statue of Liberty Came About” (2014), in which the iconic symbol welcoming countless immigrants is based on the sculptor Bartholdi’s purported African-American model.  Paul Weissman’s “Home” (2017) posits the planet Earth, the only viable venue for human life known in the solar system, as our cosmic home. The transformation of home through the passage of time is depicted by Andi Arnovitz’s “Empty Nests” (2016), expressing the heartache when children leave home, Barbara Green’s self-portrait embedded in images of her childhood home and her present-day studio, Robert Forman’s yarn painting of the converted firehouse in which he now lives, and Claire Jeanine Satin’s transparent family history book.

The dream of creating a Jewish homeland is portrayed in Archie Rand’s “Herzl” (1998), and its contemporary reality is portrayed by Tamar Hirschl layering the map of the State of Israel with the shields of the ancient Twelve Tribes. The challenges of creating a new homeland are depicted in Ari Bar Lev’s barren desert photograph of “Hazerim Immigrant Transit Camp” (1956) and Debbie Teicholz Guedalia’s “Homeless in the Holy Land” (2014). Ayana Friedman’s “My Home Is Not My Castle” (1992) depicts the ruined vestiges of the Mamila neighborhood in Jerusalem, once the no-man’s-land between Israel and Jordan, while Ruth Schreiber asks “Where” (Did the Temple Stand)” (2017), superimposing the Second Temple (‘God’s Home’) blueprint on the contemporary Temple Mount in Jerusalem. Tina Weiss’ photographs of “Sigd – An Ethiopian Jewish Holiday” (2017) document the annual day of prayer focused on their return to Zion. 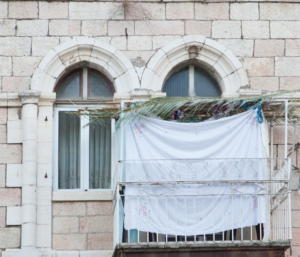 The role of ritual in creating a sense of home can be seen in Heddy Abramowitz’s “Balcony Sukkah for Two, Jerusalem,” (2016), where a tiny, temporary dwelling for Sukkot is crammed onto a shallow balcony.  It is also found in Sharon Epstein’s “Canopy of Stars” (2016) and Jeanette Kuvin Oren’s “Huppah” (2012), wedding canopies that symbolize the homes that brides and grooms will create. Ken Goldman’s “Bayit” (2016) (Hebrew for home) presents tefillin boxes that resemble a red brick house, explaining that the tefillin ritual creates a portable home and connection to family.  Judith Hurwitz and Phyllis Freedman portray “The Freedman Table” (1975) laid out for Shabbat, including the family dog. Tobi Kahn’s and Judy Sirota Rosenthal’s mezuzot provide a contemporary iteration of the biblical instruction that ‘the doorposts of your house” are to be marked with God’s words.

The nostalgia of pre-war Eastern European home life is evoked in Yussel Dershowitz’s “Jewish Family at Home” (c. 1920),  Roman Vishniac’s “Basement Home of a Porter and His Family, Warsaw” (c. 1937), and Rochelle Rubinstein’s “Village in Silk” (2015) of her father’s prewar home in Hungary. Mark Podwal’s “Most Families Managed to Acquire a Cow” (2016) is drawn from his Kaddish for Dabrowa Bialostocka, the town of his mother’s birth destroyed by the Nazis in 1941. 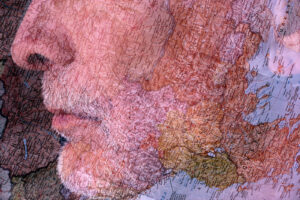 The impact of the Holocaust is presented in several works. Bunny Burson creates an installation of ghostly resin door plaques and a letter delivered after the L. Cohen family had fled Berlin.  In Claire Boren’s “Home 2” (1998), the fragmented lintel and deeply etched surfaces allude to early childhood memories of precarious shelter in attics, barns, forests, and under a pigsty to elude Nazi capture. Dorit Jordan Dotan’s layered digital photographs convey the plight of her family as displaced refugees in Shanghai.  David Goldberg superimposes his self-portrait onto a 1939 map of soon to be devastated Europe in “Self-Portrait, from the Old Country” (2015). Ruth Weisberg’s “Keep the Gates Open…We Are Not the Last” (2004) depicts survivors attempting to enter British-embargoed Palestine on a rickety ship named after Haviva Reik, one of thirty-three Jewish parachutists from Palestine sent on a military mission to Nazi-occupied Europe.

The contemporary condition of millions of refugees fleeing bloodshed and risking their lives to find safe haven is reflected in mixed media works, including Rosalyn A. Engelman’s “Where Shall I Go?” (2017) and Iris Levinson’s “Beyond the Red Line” (2016). Grace Graupe-Pillard’s “Truckload” (2014) and Leonard Meiselman’s “Asylum Seeker” (1992) express both hope and despair.  Linda Stein’s mixed media works explore the issues of global displacement and memory loss.

The plight of the homeless in our communities is explored is Susan Grabel’s and Joan Roth’s haunting portraits, and Larry Frankel’s “By a Simple Twist of Fate” (2017) a depiction of a shelter decimated by fire. Bodo Korsig presents a photographic essay on children living in poverty in Rio de Janeiro, Brazil, and Johannesburg, South Africa. John K Lawson’s “The Mayor of Main Street” (2015) and David Zimmerman’s “Last Refuge 123” (1992) portray homeless individuals and their improvised shelters, embedded with the detritus of their worldly possessions.

Relocating one’s home is colorfully depicted in Jacob Lawrence’s “This Is a Family Living in Harlem” (1941), from his series portraying the Great Migration of African Americans to the North.  Clarissa Sligh’s “Swim” (2005) expresses the fear intrinsic to growing up in an African-American blue-collar community in the Southeast. 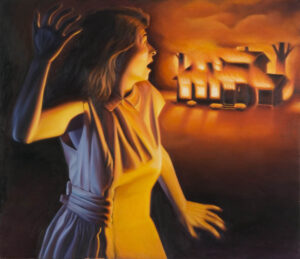 Home as a source of trauma is evoked in DOEprojekts’ “Performance Circle One – Home” (2012), where stunted trees represent impediments to human growth and independence. Nancy Koenigsberg’s “Alone” (2017) is a visual evocation of the Yiddish expression of “alone like a stone.” Trix Rosen’s “Walking on Broken Glass” 92017) conveys the violence that attempted to evict her from her home.  David Wander’s “Lot’s Wife” (1990) expresses the destruction of a home through a divorce.

Jean Bloch Rosensaft, Director, states, “We hope this timely exhibition raises consciousness about the blessings of a secure home and homeland and raises our conscience as witnesses to the plight of millions of homeless individuals, refugees, and immigrants seeking safe haven in our country and our world today.”

The Thin Line Between Home And Homelessness